Does Our Church Need an AED? By law, churches are not required to have an automated external defibrillator (AED). However, there are many good reasons why a church should consider investing in one of these life-saving devices.

The American Heart Association (AHA) recommends that AEDs be “available in public and/or private places where large numbers of people gather.” Churches certainly meet the definition of being a place where large numbers of people gather. Think of how many people pass through your church each week. How many services are held each Sunday, and how many people are usually in attendance? Don’t forget to count any midweek services that your church holds. Now consider how many people come to the church throughout the week for bible studies, fellowship projects, youth groups, various meetings, music and choir practices, and summer camps. Then consider large gatherings that bring visitors to your church, such as weddings and funerals. If your church is large, you also may have a gymnasium, a swimming pool and/or a school attached to the church, and these are all places where having an AED nearby is highly recommended.

Another factor to consider is that people in the community are sicker than they have ever been. The hospitals are not keeping patients as long as they used to and are sending them home earlier and with more medical issues to deal with. Where do these folks want to go? Well, they need to go to the doctors for appointments, the grocery store and they want to go to church.

Will we ever actually use the AED?

Hopefully, the answer to this question is no. However, cardiac arrest is a more common event than you may realize. In 2015 the Washington Post reported that nearly 600,000 people experience cardiac arrest each year in the United States, which is equivalent to 1,600 victims per day. Two-thirds of those events occur outside of a hospital.

So who may be at the highest risk or sudden cardiac arrest (SCA)? The incidence of SCA increases with age, and the median age of people who experience cardiac arrest outside of a hospital is 66 years. It should be noted, however, that children are also at risk for SCA. The American Heart Association believes that approximately 6,000 children experience SCA outside of a hospital each year. The underlying cause of SCA in children is often a congenital heart disorder which may or may not be diagnosed before cardiac arrest occurs. Various forms of heart disease are also the culprit behind SCA in adults. People who are particularly at risk include those with coronary heart disease, with a higher risk seen in people who have previously had a heart attack, and people with heart failure. Given the prevalence of these conditions in today’s society, it is more than likely that there are people who visit your church who have risk factors that could contribute to a sudden cardiac arrest event.

As previously mentioned, it is particularly important for you to consider obtaining an AED if your church has a gym or pool. While it is thought that regular exercise may decrease the risk of SCA, a higher-than-average number of SCA events in adults occur during or immediately after vigorous physical exertion. It has also been found that the likelihood of a child or young adult experiencing SCA is increased by participation in athletic activity.

“Can’t we just call 911 and wait for help to arrive? We don’t want to risk making the situation worse!”

Cardiac arrest needs to be treated fast. In an ideal situation, 911 is called immediately, someone starts CPR within seconds to minutes of witnessing the victim collapse, and an AED is attached and used within 3 to 5 minutes. By the time first responders arrive (which is, on average, approximately 8 to 12 minutes after a call is made to 911), critical time has been lost. SCA is a very difficult condition for anyone to recover from, even when given the very best care. In fact, anything that is done to try and help is likely better than doing nothing at all. Multiple scientific studies have shown that the sooner treatment is started the more likely it is that a person will survive.

CPR is a very important part of helping someone in cardiac arrest. However, early treatment with AEDs has been shown to double the rate of survival compared to situations where only CPR is provided.

“Can anyone at our church use an AED?”

It is a good idea to have several staff members and church members specifically trained in CPR and trained to use the AED. In general AEDs are easy to use, and will even give verbal instructions to the rescuers. However, people with training will be familiar with the necessary procedures in the case of a cardiac arrest, such as ensuring that Emergency Medical Services (EMS) are notified immediately, and knowing how to provide effective CPR.

CPR certification classes can be a great outreach ministry. Hosting classes at the church is an easy way to increase the number of members that are capable and comfortable helping out in an emergency. Only 3% of Americans are certified in CPR each year, so it’s also a wonderful way to help train more people in your community to save lives.

“Where should we keep the AED?”

The place where you store the AED will be specific to each church, based on its size and layout. Very large churches and churches with multiple buildings on their campus may want to consider purchasing more than one AED. The ideal location would allow anyone who needs the device to access it and get it to the patient in less than 3 minutes. The location should be well marked and known to the members of your church, especially those who are trained to use the AED. It should be easy for anyone to access. Often AEDs are found in wall mounted cabinets, which have the advantage of protecting the device from tampering or theft.

Churches have a lot of expenses, so it’s easy to see why purchasing an AED might not be high on their priority list. It’s necessary to do a bit of research. Look to see if there are any grants available locally or nationally. Churches often qualify for such grants because they are non-profit organizations. Next, see if there are any foundations you can work with to obtain an AED. There are some foundations that raise money to buy and donate AEDs to public places, including churches, with the hope that an AED will be nearby if anyone ever needs it. Ask your congregation for help and explain that the AED is for the safety of everyone. Finally, speak with your retailer to find out if there are any discounts or packages available for faith communities that may help with the cost of the device.

A mother who lost a son to sudden cardiac arrest in 2002 made it her mission to raise money to put AEDs in her community’s schools and churches. In 2008 one of those AEDs was put to use when a parishioner had a heart attack then experienced cardiac arrest during a service. EMS attributed the parishioner’s survival to the ready availability of the AED.

A 36-year-old man was playing a game of basketball with his friends at a church gym in 2013 when he collapsed on the court. At first he was still breathing and able to speak, but his condition deteriorated and soon he was no longer breathing. At this point his friends, who had already called 911, began CPR and went to get the gym’s AED. The friends followed the AEDs instructions, and it only took one shock before the man started to recover. The man was able to receive surgery to correct the condition that caused the initial heart attack

This church was originally hesitant to purchase an AED. Some members wondered if it was necessary and worth the cost. Some members strongly advocated for getting the device, and it was purchased using funds from a memorial for a parishioner who had died of heart disease. It was one of those advocates who ended up needing the AED after collapsing and going into cardiac arrest one Sunday morning. The man survived, and he now encourages other churches to purchase AEDs.

A Wedding in Branchburg, New Jersey

On August 29th, 2015 a couple was preparing to get married when the bride’s 70-year-old aunt collapsed. A friend of the couple, who happened to be a nurse, assessed the aunt and started providing CPR while the groom-to-be, who was a firefighter and EMT, went to get the church’s AED. After the third shock was provided, the aunt’s heart started working on its own again and the aunt regained consciousness and began talking. Reportedly, the AED used has only just been purchased by the church a week before the wedding. 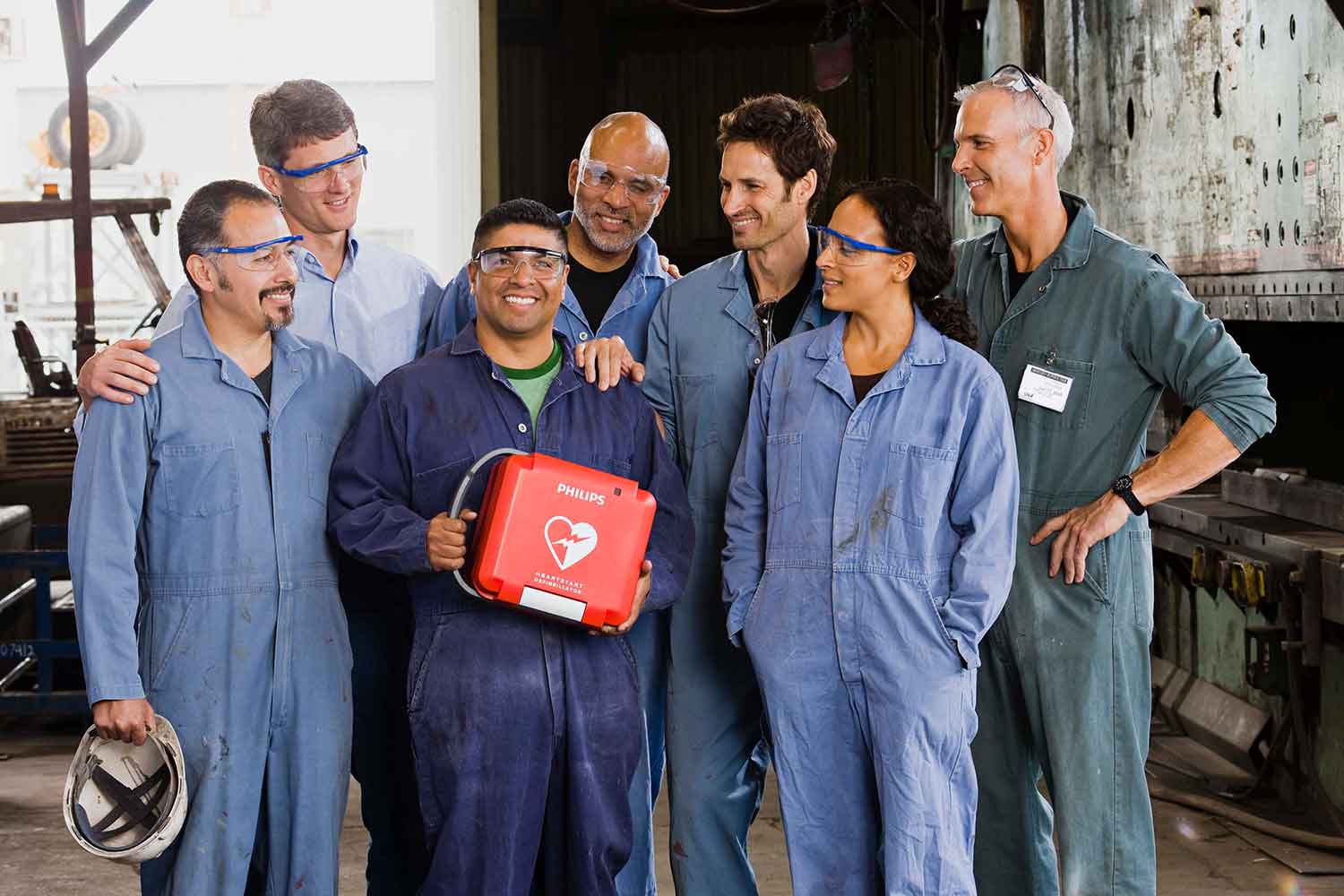